Here is a simple trip report from Weston (EIWT) To Sligo (EISG) in Ireland.

It's a simple trip but it's nice to see some winter scenery.

I’d last flow on 1 October, so 2 and half months ago. Our aircraft only recently came back from its annual inspection and my two attempts to fly since then were thwarted by the weather. Work is slowing down now in the run up to Christmas and the weather looks like it will get wet and rainy from the weekend up to Christmas. After Christmas we are going to Austria for a few days. So this week was likely to be my last opportunity to fly before the new year. So I took a day off work to make a nice day trip.

Given that I’d not flown in 10 weeks, and the days are short, I kept it fairly simple. A trip from my home base Weston (EIDW) near Dublin to Sligo (EISG).

We are having an unusually cold spell at the moment, and the METAR on departure was giving a temperature of -4C. That’s why I felt so cold!

Interestingly I came across a phenomena for the first time that I’d only read about previously. Our aircraft is hangered now (used to be outside). So there was no frost or ice on it. But by the time I was ready to call for start up I noticed a very think layer of ‘frost’ was forming on the windscreen. I could wipe it off with a dry cloth, but that prompted me to check the wings again. Yes, the cold soaked wings were now developing a thin layer of frost! Thankfully I could rub it off with a cloth from the leading edge and stopping in the sun for a few minutes solved the rest of it. But it’s interesting how reading about something can make you more aware of it when you come across it. It was only because I read about it before, that the freezing on the windscreen prompted me to get out and check the wings.

Anyway, these are a few photos of the country side covered in frost & ice. It’s really beautiful to see everything looking so white and pristine. 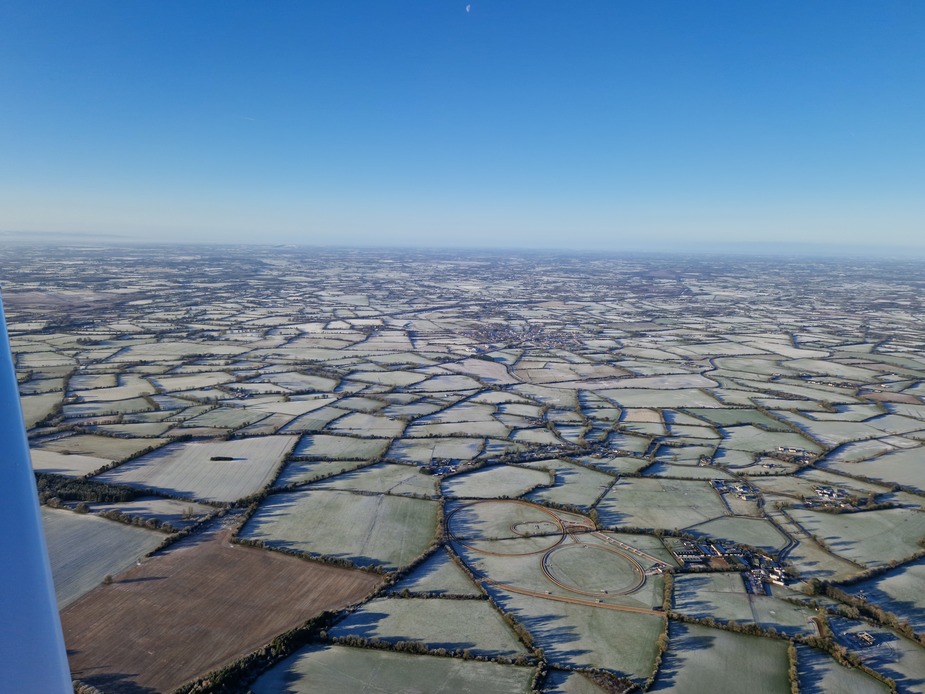 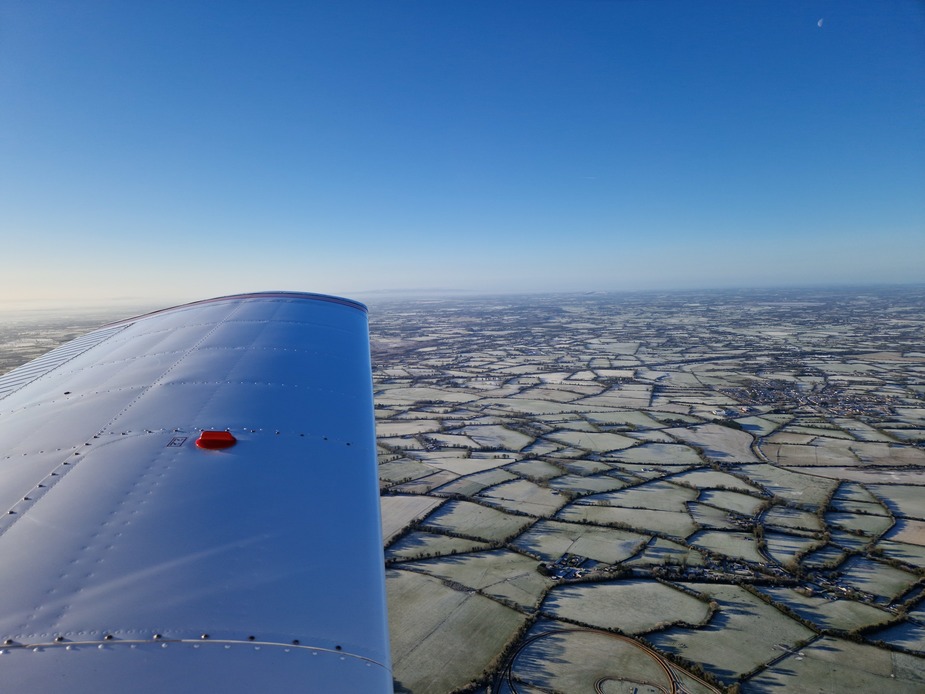 This is Fore Abbey.
"Fore Abbey History": https://en.wikipedia.org/wiki/Fore_Abbey
It’s the ruins of a Benedictine Abbey founded in 630 AD. 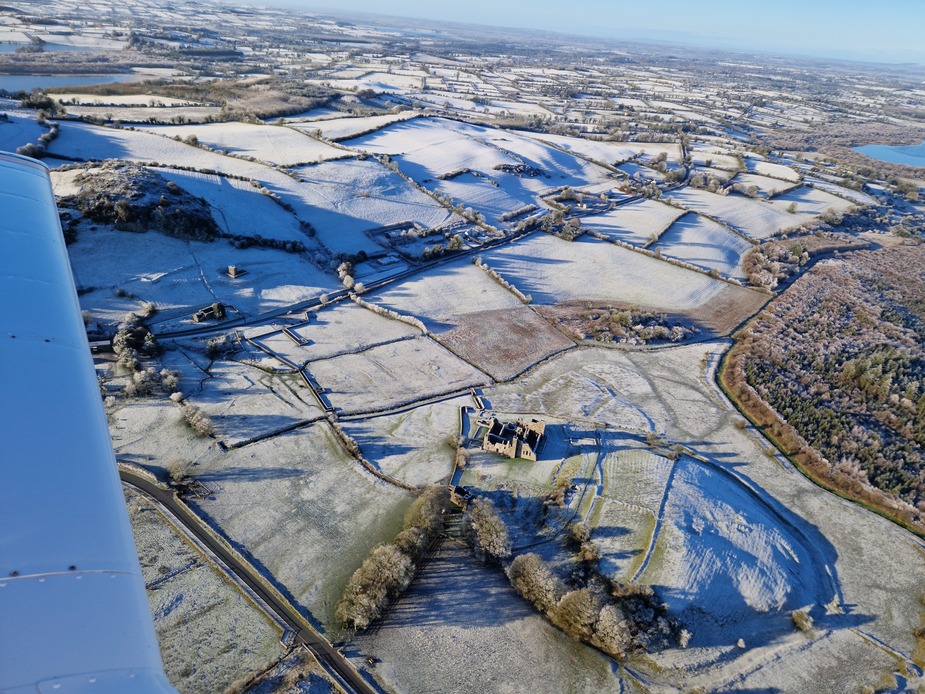 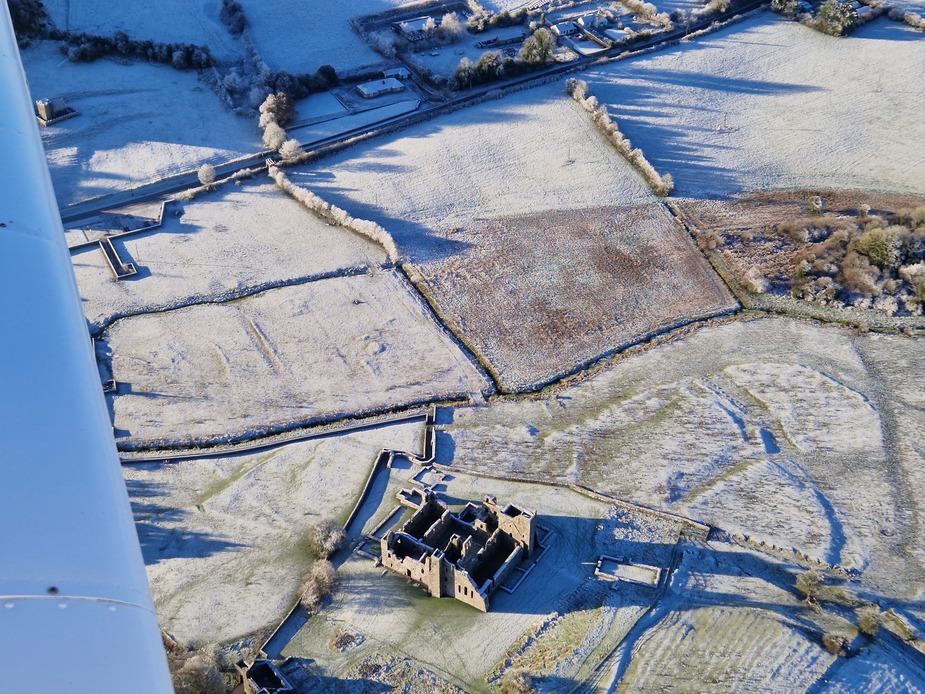 A small fire. Interesting to see how it spreads out in the cold clear air.

Sheemore Cross. It’s built on the top of a small hill.
"A bit about Sheemore Cross": http://www.carrowkeel.com/sites/misc/sheemor.html 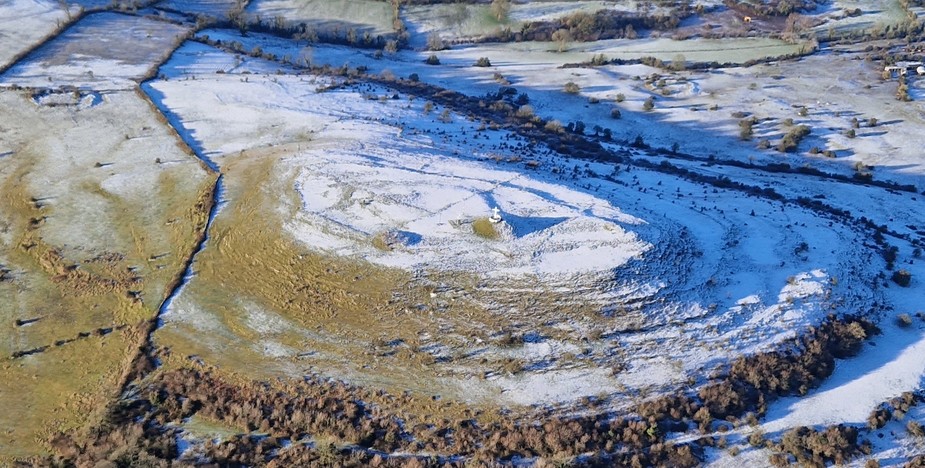 Kilronan Castle.
It was originally constructed around 1820 and was considerably expanded in the 1880s to form the current building. It’s now a very nice hotel.
"Kilronan Castle on Wikipedia": https://en.wikipedia.org/wiki/Kilronan_Castle
Some snow on the mountain tops.

Some snow on the mountin tops

I didn’t have a huge amount of time in Sligo. My home base closes at 4pm (no out of hours landings) so I needed to be airborne by 3pm absolute latest. Preferably a bit earlier. I could just go for some lunch but I would have been early for that, and it seems like a bit of a waste. So instead my plan was to hike up the Queen Meave Trail up the hill called Knockarea and bring a packed lunch to eat at the top. I’ve done the trail before, and posted about it here on EuroGA. It’s a very nice, if short, hike. It’s a lot of uphill, so you’ll either need to be fit or take it slowly.
Here is a link to the trail
"The trail guide": https://www.sportireland.ie/outdoors/walking/trails/queen-maeve-trail

I was a bit delayed leaving my home in the morning, and this cut into my time. So I hiked quickly!

Some of the steps on the way up the hill.

A nice warm cup of tea at the top. 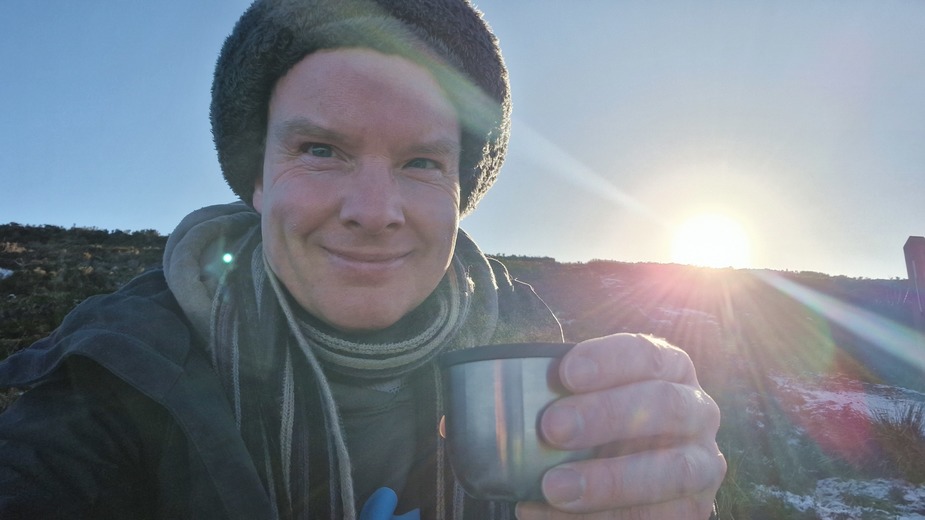 Sligo Airport from the viewing point near the top of the trail.

Some photos on the way back down

It took me 1 hour 10 mins to get from the airport exit to the top of the hill. Well almost the top. 1:10 to the viewing point. It’s about another 5 mins to the very top and you can walk for another 5 mins or so along the top to the grave mound. But the best views are from the viewing point anyway. I’m fit and a regular hiker, and I was tight on time. You should probably budget on it taking a bit longer and maybe twice as long if someone in your group isn’t fit. But there isn’t anything difficult about the hike other than the uphill element. So anyone can do it if not in a rush.

Parke’s Castle with a history dating back to 1546 (according to Wikipedia!)
"Parke's Castle on Wikipedia": https://en.wikipedia.org/wiki/Parke%27s_Castle

Some lakes with some partly frozen water.

This is Belle Isle Castle. An 18th castle that again has been turned into a luxury hotel.
"Belle Isle Castle on Wikipedia": https://en.wikipedia.org/wiki/Belle_Isle_Castle

Crichton Tower
A tower in the middle of the lake Lough Erne, built in 1847.
"A bit about Crichton Tower": https://heritagerecords.nationaltrust.org.uk/HBSMR/MonRecord.aspx?uid=MNA152488 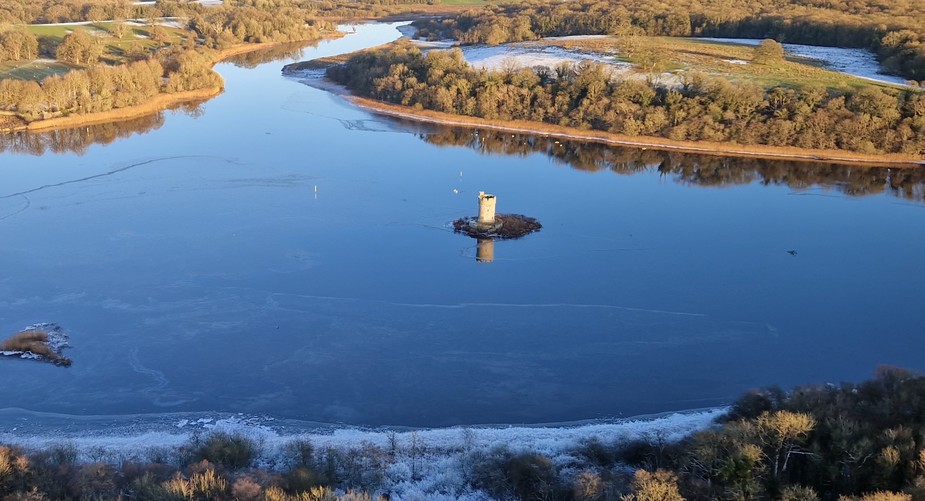 Weston Airport, my home base.

All in, a really nice day out. It was exactly 3 hours from touch down in Sligo to takeoff again. So really nice to be able to make a nice hike, get some scenic views while enjoying my packed lunch in a tight window. And it’s not often that I get to seem my country from the air - covered in white.

Nothing special in this report, and it's sights that I've seen many times. But nice to see some of them again, in a different light and a good example of how you can have a nice day trip on short winter days and still pack some stuff in.
It also helped me get comfortable again, having practiced a load of PFLs, some steep turns (mainly just for fun! ) and some stalls as well as some touch and goes.