As most of you know, PocketFMS have started the EasyVFR 4 project three years ago. This project is much more than just a new app. Many areas of our work field are considerably overhauled to be prepared for the future.

All this work resulted in significantly increased quality and quantity for our AeroData and geographical features, which paid off in a steady growing number of EasyVFR 4 users.

But we are not forgetting our EFIS users! Over the years we’ve received many suggestions and wishes, and now EFIS users too can start to benefit from all the work we did.

One of the most expressed wishes was to include more European-specific features. Europe is a blanket of individual countries, all with their own history and procedures which don’t fit well in the database design of most EFIS systems.

To bring all the additional features EasyVFR 4 has to offer to EFIS users, we decided to launch a new project: EasyVFR 4 raster charts for EFIS. Most EFIS systems support displaying raster data (bitmaps) one way or the other, and often also provide the capability to provide different data for the various zoom levels. The idea is to use this facility to bring previously unavailable data to the various EFIS systems. Not only AeroData, but also geographical data and dynamic data like graphical NOTAMs and daily airspace activations will eventually be possible!

Milestone 1: Integrate AIRAC-cycle based dynamic data consistently for use in entire Europe.

As a first milestone we are proud to introduce our first version of the EasyVFR 4 European raster chart for EFIS. This chart is updated every 28 days in line with AIRAC and complements the AeroData databases on these systems with typical European features like FIS, Squawk listening, transponder mandatory zones, TIS, TIA and (M)ATZ, using a colour scheme closely representing the various European ICAO charts.

As this is just the first version, we appreciate all user comments and suggestions. Nothing is carved in stone yet. Although the chart is already very complete, we’re sure that valuable suggestions and improvements will be received and implemented over the next few months.

Milestone 2: Getting the data on the EFIS systems in a flash.

As a second milestone we are trying to make it easier to get all this data onto the EFIS systems. All these systems require downloading data and then copying to a memory card or USB memory stick, which creates a lot of room for errors, and requires the use of a desktop or laptop computer plus some computer skills. Since more and more people are switching to tablet-use only we started to develop a device called AvionicsData Wireless USB Stick, abbreviated as ADS.

This is a small USB device which plugs into the USB port of an EFIS system and allows wireless transfer of all kinds of data between tablets and phones, without the need to download the data first on a desktop or laptop. Our initial proof of concept worked flawlessly, but unfortunately a high end-user price tag of around €500 made us decide to give it another try with a different manufacturer. Although this version is now 95% completed, we are stalled at getting it to work 100%. It turns out getting the last 5% done is taking more time than expected, but we’re sure we will nail that last bit as well, not too far from now!

When it will become possible to get data transferred in a flash from any portable device like a tablet or phone, our next milestone will be to integrate data that changes on a daily basis, for example graphical NOTAMs and EasyVFR 4’s Smart Map, in which airspaces can be hidden or highlighted based on their current activation status.

Although currently still a moon-shot, when milestone 3 is reached we won’t be far off from a system where we can provide data almost instantly to EFIS systems. Think about NOTAMs that announce sudden airport closure, significant weather changes enroute etc.

My cart
Your cart is empty. 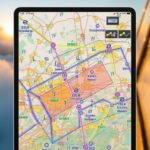